Donald Jaeger, the founder of CDM, plays the drums, seated on his own creation of a specially designed drum seat to help alleviate some of the pain and pressure on his spine.  Don played with CDM’s first band, Range of Motion, for 12 years and is currently living in Virginia where he still works actively for the organization.

Tom Ryan, learning disabled with a form of auditory dyslexia, is one of the songwriters and vocalists who also plays the guitar, bass and keyboards. Tom was a finalist in the 1992 Babylon Arts Council song writing contest and has received a citation from Nassau County for his work with the organization. “CDM has enabled Tom to overcome his barriers in communication and to facilitate his growth as a musician and performer. He has been able to fulfill many of his goals and has the opportunity to reach his fullest potential,” said his mother, Pat Ryan.

Vocalist and song-writer, Linda Wilson Jaeger lives with Spinal Muscular Atrophy. She joined CDM when she was single and later married Donald’s brother, Robert (Bobby) Jaeger, the “all-around guy” who moves equipment, runs the sound system and does anything else that needs to be done. Linda’s doctors are very pleased with her participation in CDM. By singing and performing on a regular basis, she exercises her lungs – something which is very important for someone with a debilitating neuromuscular disorder.

Michael Zielinski has studied drumming with CDM since 1992.  He officially joined CDM in the beginning of 1996, although he had taken lessons from CDM founder Donald Jaeger for several years.  He started making cameo appearances with “Range of Motion” at the age of 16, and is now drumming full time with the band.  In May 1996, Mike received the Suffolk County Youth Achievement Award at Longwood High School for his academic achievements, extracurricular activities, involvement with CDM and for his ability to overcome the obstacles that his disability (Cerebral Palsy) presents.   Mikey’s enthusiasm abounds behind the drum kit.  He serves as an excellent and inspiring role model for youths with disabilities. 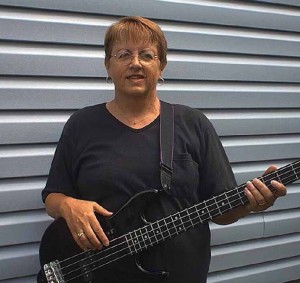 Pat Ryan joined CDM with her son Tom in 1987.  She pitched in right away to help the organization gain its nonprofit status and with administrative tasks such as grant writing and orientation of new members.  Till hip arthritis worsened, she also worked with the road crew.  Pat has a long history of volunteerism along with experience in teaching and professional training as an artist.  CDM inspired her to develop computer skills in web design and she currently maintains this web site.  Over the years she took lessons in several instruments but never found a good fit till one of the bands unexpectedly lost a bass player.  With CDM’s encouragement and lots of work and practice, she found her place in music.

John Phillips first began performing in the 1960s as a drummer with the “Johnny Phillips Band” and the “Jet Set.”  More  recently, as a guitarist with the “Fire and Ice” band in the Hudson Valley area and as a regular performer with “The Music Club” at Richmond Street Recordings.  Since 1990 John has studied with “The National Guitar Workshop” in Lakeside, Connecticut, and has attended Irish folk music studies in Dublin and Galway.  He has performed  in Chicago, Colorado, and Wyoming, and has auditioned for “New York Underground.”  John has been playing with CDM’s “Range of Motion” since November 1998.  He studied acoustic  blues with  Paul Rishell and teaches guitar and drums.  It takes a lot to slow him down despite his total hip replacement  from an arthritic condition.  when  he’s not playing on stage at a CDM gig, he’s diving in with the rest of the road crew   helping to set up the sound system. UPDATE: Sadly, Johnny passed away in 2014 after a long illness. We miss him very much. 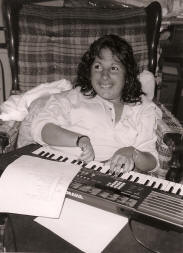 Patti Panzarino (Pidgie) started playing piano when she was six years old. She was a founding member of the Coalition for Disabled Musicians (CDM) and the band “Range of Motion” and designed the logo for CDM.  She was a member of Range of Motion for nine years before moving to Massachusetts where she hosted her own live radio program.  “The talent and enthusiasm that Pidgie contributed is immeasurable” said Donald Jaeger, CDM Founder.   Patti is a published songwriter/vocalist/keyboard player. She is also the co-founder and musical director of OLYPSYS, a band in Massachusetts that recently signed a recording contract with an independent record label. She is the newly crowned Ms. Wheelchair Massachusetts 2012 and is still encouraging musicians with disabilities to “go after their dreams!”

Tony Tramontana began to play the bass in 1963 and joined a band that played dance music.  In the late sixties he had his own band that played at weddings and dinner dances.  In 1986 Tony was hurt on the job and could no longer work.   Joining CDM in 1988 he began immediately playing with the CDM Orchestra, playing swing, jazz and pop.  He has taught guitar privately and has a vast knowledge of musical styles.  He is now a fill-in bass player for “Range of   Motion” as well.  Tony volunteers time playing in church musicals, and senior centers.  He also plays professionally with the James Street Players and other community groups.  In recognition of his contributions and musical abilities, Tony was selected by the music department at West Babylon H.S. TRI-M Music Honor Society as a lifetime honorary member.

PARALINKS – The Electronic Magazine for People with Spinal Cord Injury

Gary from Paralinks has made CDM aware of other musicians and musical organizations through his “Musicians Who Happen 2B Disabled” page on the site.  Some are already listed on our links page, but some are new to us.  Please check it out!

“Our organization has helped a lot of people get past their limitations. A lot of people who wouldn’t be playing music are playing music today because of us,” said current CDM President, Linda Jaeger. Each of the group members is conscious of each other’s limitations, but they emphasize that the public enjoys listening to their music and does not patronize them because of their disabilities. They take a unique tag-team approach to their music, since many of them are severely disabled. When one member fatigues another member takes over to cover. Donald, who has studied with Liberty De Vito, Billy Joel’s drummer, shares his technique with his disabled drumming students.